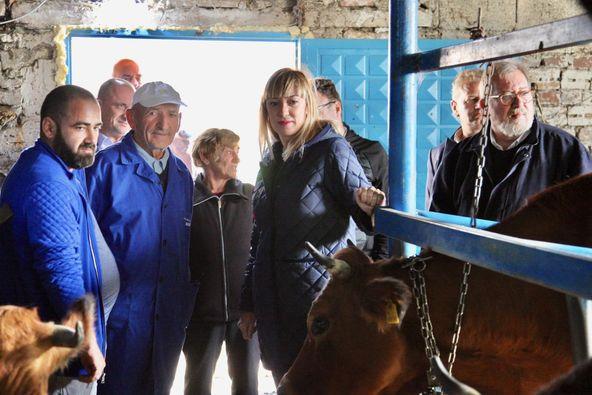 The BCTI team, represented by Mr. Philippe AME and Mr. Vigan DERVISHI, carried out a support and evaluation mission in Albania, within the framework of the IVEA project (Green Routes for Albanian Livestock) from October 26 to 30. This is the 11th expert mission since the launch of the project last March.
The mission was the occasion to organize a visit of the Minister of Agriculture and Rural Development, HE. Mrs. Frida KRICA, to the Technology Transfer Center of Korçë which is hosting many activities of the project. The Minister also had the opportunity to visit a mountain farm near Korçë and to talk at length with the farmers, one of whom is a referent for the IVEA project. The situation of the small and medium-sized farms and the solutions brought by the project were widely discussed both with the operators and with BCTI. Indeed, the Cooperation Office brings to the Ministry an important and appreciated support to the elaboration of strategies aiming at developing these small farms which represent the essential of the production potential but also the biggest potential of improvement... with a very important leverage effect at the national level.
The mission also coincided with the delivery of the first equipment, including solar milk coolers. The cooling tank will be installed at the station of Korçë and the can cooler will be entrusted to a referent sheep breeder of the region of Gjirokastër. This last one will be able, as referent breeder of the IVEA project, to receive trainings of shepherds around the good zootechnical practices given by the service of the vulgarization. He is also expected to lead a first progress group on cheese processing under geographical indication.  All the equipment will be delivered by the end of the year and the inauguration is planned for early next year.

FEEDIPEDIA: when use of non conventionnal is at stake